The historical center of Veisiejai town

The city is located on a peninsula surrounded by Lake Ančia. Written sources mention Veisiejai since the time of Mindaugas (1253). The old part of Veisiejai has been declared an urban monument. Protected network of streets, 18th c. second half of the 19th century a plan of the beginning of the square, fragments of the building, a panorama of the old part of the city and the natural environment. City development - linear. In the city center is a 16th century. elements of the second half of the Baroque and Classicist plan. The network of streets fits perfectly with the uneven terrain of the area. The perspectives of the streets coming into the center are closed. There are streets. The city has an architectural monument - a towerless church of classicist forms of Baroque structure, built in 1817. 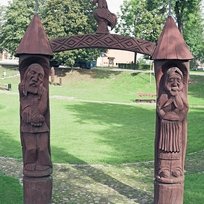