Revelation of the Lord Church of the Virgin Mary in Šlavantai

1822 landowner M. Gauronskis built a chapel in Šlavantai, which in 1880. was dismantled and moved to Šventežeris. 1919 priest Juozas Galeckas bought the manor of Šlavantai, and in the following year founded a parish (from the villages of Lazdijai, Šventežeris and Veisiejai parishes). 1921 priest Juozas Galeckas built the present church from the manor clown. 1938 part of the building was rebuilt after the mushroom was thrown in. After the Second World War, the church was repeatedly repaired: the altars were remodeled, the ceiling of the middle nave was changed, the interior was decorated, and the walls were covered with boards. The church stands in an open, level, almost unbuilt place, in a rectangular cemetery. A long, low rectangle built is three naves. The high altar of the work of Master A. Soraka is neo-Gothic, the side ones are of order forms. Above the entrance there is an organ choir surrounded by a fence of cut boards. 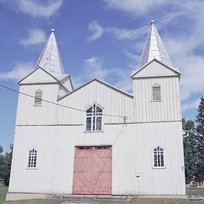