On March 20, 2022, a chapel pillar created by Artūras Zienka and Ramūnas Šuminskas in memory of M. Bižytė and her feat was unveiled and consecrated. Marija Bižytė was born on March 18, 1935. Radviloniai village, Veisiejai district. He also associated the first years of his independent life with Veisiejai: he worked in a teahouse (canteen), later in a construction organization - he built a high school building.

In 1959, two little girls were saved from the wheels of a truck in Rudno, Kazakhstan. Unfortunately, she died herself. Marytė Bižytė is considered a hero in Kazakhstan. In the city of Rudno, Kazakhstan, there is a street named after her, a monument dedicated to her.

A monument was unveiled in Veisiejai on the street named after her. 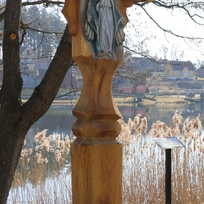