1928 a 4.5-story concrete Independence Monument was built. Its unveiling took place on September 23, 1928. Since the homestead (a house with a restaurant) stood almost in the middle of the square, the monument was closer to Seinų Street. It is imitated by a tower complete with a bark, built on a low pedestal and a stepped platform. At the foot of the pedestal was a plaque with an oak wreath and the inscription: "The work of the heroes / the courage of the warriors / shines for the ains / forever." In the front plane of the monument there was a bas-relief of the tower of Gediminas Castle and two inscriptions separated by an ornament: “Oh, don't forget Vilnius, Lithuanian ! / 1918 - 1928. / Having lived in freedom / we will learn to defend it ”. Around the monument was a metal fence of buildings between the concrete columns.

1990 Jonas Verseckas and other townspeople took the initiative to restore the Independence Monument, which was demolished during the Soviet era. In the changed urban situation (reduced square, trees grew on the perimeter of its remaining part, etc.), the monument was built in a slightly different place than before, and the column of the square plan was finished with stylized elements imitating the castle shell. 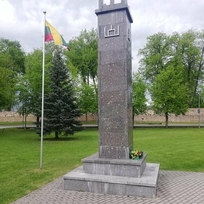 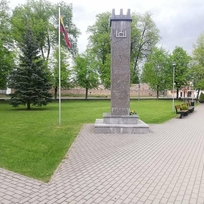