Church of St. Matthew the Apostle Evangelist in Krosna

About 1655 There was an oak chapel in the furnace. 1760 a parish was formed, consisting of villages belonging to Simniškės, and a wooden church was built (demolished in 1838). The current church was built in 1840–1842. parishioners and government funds. The cemetery was fenced in 1871. 1907–1910 installed organ. 1912–1913 the church was enlarged according to the project of Kalvarija county engineer K. Vasiliauskas. 1915 Russian soldiers kidnapped the bells. 1920–1921 the church was repaired and repainted. 1921 M. Kasiulis painted the Blessed Sacrament of the Immaculate Conception on the ceiling of the presbytery. The image of the Virgin Mary. 1932 the building was repaired. J. Dragašius' project to raise the towers was prepared, but it has not been implemented. 1935 according to the project of Marijampolė county engineer Adolfas Lukošaitis, the slope surrounding the cemetery was arranged, stairs were installed, the fence of the cemetery was built, in 1937. - the cemetery gate. 1938 a new bell was loaded into the tower. Two bells were bought that year. 1959 the church was repaired again. 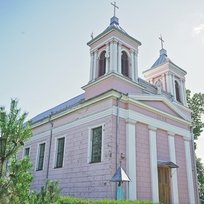 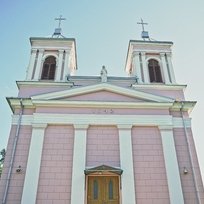