Ludwig Lazar Zamenhof (1859–1917), creator of the Esperanto language, lived in Veisiejai since 1885. He was born in Białystok, in the family of a foreign language teacher. While studying at the gymnasium, he diligently studied foreign languages and learned as many as 12 foreign languages. After graduating from high school, he created the first international language project, but his father did not agree with LLZamenhof's choice - he burned the manuscript of the language project and sent him to study medicine. After studying in Moscow and Warsaw, Ludwig came to his sister's husband in Veisiejai. In Veisiejai, LL Zamenhof practiced medicine and restored the Esperanto manuscript. Breeders are therefore legally considered to be the birthplace of Esperanto. 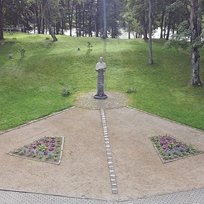