The pavilion of the former Veisiejai Manor with a park

The beginnings of the Veisiejai manor date back to 1501, when the Grand Duke of Lithuania Alexander donated these lands to the Glinskis. 1613 Radvila became the owner of the breed. 1733 the manor was bought by Teodoras Masalskis, later the manor was owned by his sons Andrius and Stanislovas. The homestead of the manor, the fragments of which have survived to the present day, was created by the great hetman of Lithuania Mykolas Juozapas Masalskis, who had married Pranciškas Oginskaitė. The future bishop of Vilnius, Ignotas Jokūbas Masalskis, was born in their family. In 1743–1745, the owner of Veisiejai, the Grand Hetman of Lithuania, Mykolas Masalskis, completed the U-shaped representative palace by presenting two flags. The only chalice from the once chic manor has survived - a one-storey plastered brick building. 2014 The Visitors' Center and the Park Directorate of the Veisiejai Regional Park were located in the only surviving wedge of the Veisiejai manor, which was managed with the help of the EU structural funds. 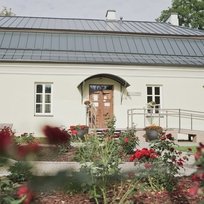