in 1990 on August 23, commemorating the 51st anniversary of the Ribbentrop-Molotov Pact, at the Lazdijai border crossing point, at that time Lithuania's only gateway to Europe, Sąjūdis organized the European Road campaign, which symbolized the return of the Baltic states to Europe. Although 8 months had already passed since the restoration of the independent Republic of Lithuania, the border with Poland was still controlled by the border guards of the Soviet Union.

Although the European road was not as massive as the Baltic road and is much less often remembered than it, in the rainy 1990s on the weekend of August, an impressive crowd of people from all over Lithuania came to the fields near Lazdijai. The rock and pop music stars of that time performed on the stage, the heads of state and the leaders of Sąjūdis spoke, and they were watched by armed Soviet soldiers from behind the barbed wire and armored vehicles. in 2003 April 23 the European forest planted in that place, as it was announced at the time, symbolized Lithuania's return to Europe and was organized between the signing of the Treaty of Lithuania's accession to the European Union in Athens in April and the referendum on accession to the EU in May. On an area of 18 hectares, the helpers planted 80,000 trees. pine trees and 10 oak trees, which symbolized the 10 states that were seeking EU membership at the time. 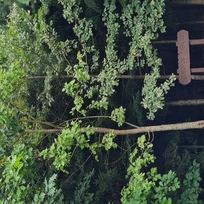 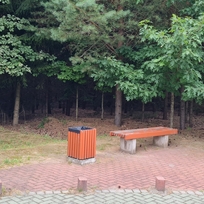