There is an archaeological monument of national importance on the peninsula of Lake Ančia - ancient defensive fortifications, also known as "Okopkos". It is a 5-6 m high embankment with a trapezoidal ring around it. Vainežeris defensive fortification is also referred to as Justinava, because Justinavas Manor was nearby. These defensive fortifications are believed to have been built by landlords in the 15th and 18th centuries and used during the war with Sweden and Russia (1701-1721). At the time, such defensive fortifications were installed near the estates. Locals said that in 1812, the French trenches on this mountain were called "okopkos" and it is, therefore, called "Okopka Mountain". The rebels were hiding there in 1863. In the questionnaire completed by the head of Kapčiamiestis station on September 15th, 1935, it is indicated that in some places the brick foundations and the place of a basement can be seen. 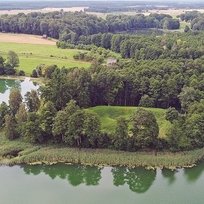