Church of the Nativity of the St. Virgin Mary in Šventežeris

Church of the Nativity of the St. Virgin Mary in Šventežeris was built in 1882. The first sacral building was the Evangelical Reformed Church in Šventežeris, built by Radvilas in 1598. 1663 it was given to Catholics. 1746 new wooden houses of worship were built on the initiative of Karolis Radvila, the owner of the manor and the town.
1783 The inventory of the Seirijai church mentions the newly built, more precisely rebuilt, Šventežeris church of Count Tiškevičius. It was a two-tower, built of old wallers with a new porch. From 1824 to 1830. this old building was closed due to insecurity, in 1831. fundamentally repaired. 1863 its condition was poor, so a project for a new, brick church was prepared. Before construction began, in 1865. October 15 the old church burned down. During the month, temporary houses of worship were built, to which all the inventory saved during the fire was transferred. 1871 October 20 the temporary building also burned down, this time with all the church property. 1880 moved to Šventežeris in the cemetery of Šlavantai manor in 1822. the former wooden chapel of the Gauronskis family was built. After the introduction of two sacristies, a tower and a portico, and the installation of a gallery inside, in 1882. the church of original neoclassical architecture was completed. 1886 equipped altars. 1907 remodeled tower, church foundations. The interior of the church was repainted in the interwar years, in 1932. the cemetery is fenced with a concrete fence. 1953 the second floor was raised above the sacristy, two portico columns were replaced, the outside and inside were painted, and the altars were renovated. Šventežeris Church is an original wooden architectural monument of the historicist era. 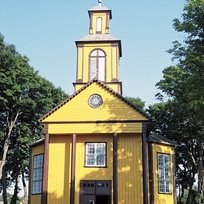