Church of Christ the King in Krikštonys

Pastor, renowned historian and ethnographer Jonas Reitelaitis (1884–1966) made the project of the church in 1926 and managed its construction. He is the only known priest who designed and managed the construction of a church during the interwar period in Lithuania. In order to be approved, the project had to be signed by a certified architect. Vytautas Žemkalnis agreed to help with his signature. He may have made some adjustments to the project. The church is a sacred building of unconventional architecture with a unique plan, unusual facade proportions, and neo-Gothic elements. The unique plasticity of the building is created by combining folk and professional architectural trends. Author originally interpreted neo-Gothic forms and used elements of folk style that were popular during that period. Inside of the church is humble with a simple grand altar. The church is large and very cozy. It looks like it is emerging from the ground with two large towers on the pediment and a small turret on the back, opposite the sacristy. One of the big towers has a bell tower. The 153-pound bell was bought by the youth of the village. J. Reitelaitis is buried in the churchyard of Krikštonys church. 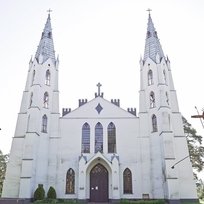 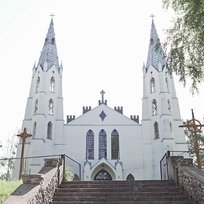