Chapel of Cross St. Mary the Queen of the Rosary

It is a Catholic shrine on the southern shore of Lake Dusia, near the Sutre stream. It is said that in 1702. Between Lakes Dusia and Metelis, the Lithuanian army led by Hetman Mykolas Servac Višnioveckis was stationed, determined to prevent the Swedish army marching to Grodno. Waiting for the enemy Lithuanians erected three crosses at the place where the army chaplain offered St. Mass. A copy of the image of the Mother of God was hung on one of them. The news of the soldiers about the approaching Swedish army reached the apostles Peter and Paul on the day of the Mass. After the battle, the area passed to the Swedes, but the local people managed to hide the image of the Mother of God. A few years later, a blind veteran of this battle regained his sight in the same place. As word of the miracle spread, people in this place began to choose for worship. It is believed that not only the image of the Mother but also the gushing spring water has miraculous powers. Good luck and Petrini discounts are organized every year. The first wooden chapel was built in 1816. The new Chapel of the Cross was built in 2000. 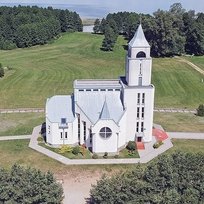 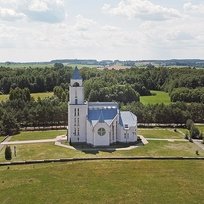